My family likes watermelon- wait, maybe "like" is not an appropriate word for it......my family is obsessed the with subtly crunchy, thirst quenching Citrullus lanatus, better known as the watermelon.  I buy watermelon any time I can find a juicy looking wedge in the refrigerator department at our local grocery store or if I have an extra $10 while driving down SR520 - at the road side stand.  And, it seems, here in Florida, watermelon is always available (there are only a few months out of the year when you can't get them in season).  Right now, watermelon is way in season, so they are selling ginormous sized whole watermelons for $4.99 each.  Of course, I had to pick one up but unfortunately, when I finally yanked the beast out of it's resting spot without falling into the cardboard crate, I didn't do the necessary watermelon test to ensure I had a good one.  So, I brought my treasure home to my family, cut it in half and realized the dang thing wasn't fully ripe.  Of course, there were moans and groans from my family (my husband being the worst) and a snide comment about how the tasteless watermelon would be better in my juicing then trying to force feed it on them.  At least Kiki (Keona), my four year old labrador, appreciated it thoroughly by begging at my feet and waiting for chuncks to be tossed in the air to her.  So, Kiki and I sat down and plunged through a very nutritious though tasteless half of a watermelon.  I put the other half of the watermelon in the refrigerator in hopes something miraculous would happen to it's ripeness.  Last night (about five days later), I decided to pull out that other half and cut it up to eat for my dinner and Kiki's snack, thinking no one else would want to eat it.  I spooned out a piece for a taste test and oh my gosh - my miracle had happened.  The watermelon was so juicy and tasty and yummy and sweet.  I put the spoon down and went to grab my knife.  When I turned around, Jordan, my son, had scooped out a huge piece, shoved it in his mouth and was chomping on it - juice pouring down his chin.  My husband walked in, made a disgusted face and said he thought the watermelon would have fermented by now.  Then, he picked up a spoon and started digging in.  Both became so engrossed in spooning out chunks of watermelon - they were making ravenous smacking, chomping and humming sounds - and mind you, they had already eaten dinner.  Kiki and I were just staring at them, wandering what the heck had just happened.  Finally, the feeding frenzy ended.  I grabbed the massacred half out of my son's hands and looked down the deep dark hole to the bottom of the watermelon and almost cried.  The one good thing about my family (OK, actually it's a bad thing, but it's a good thing for me) they only like to eat the dark pinky red flesh with all of the sugar.  Keona and I will indulge in the light pink and white flesh which is so much better for you.  And so, though, I was not able to cut up my watermelon and eat it like a civilized human being, I did get my fill - Kiki's still hungry.

How many times have you heard that watermelon is loaded with sugar and carbohydrates and should not be eaten by diabetics or those with heart disease.  I would hear this all the time by my customers at the health food store where I worked.  Scientific testing is actually showing the exact opposite.  Watermelon is a rich source of citrulline, an amino acid that can be metabolized to arginine. Among plant foods in our diet, watermelon is the only significant source of citrulline.  Arginie can assist in wound healing, helping remove excess ammonia from the body, stimulating immune function, and promoting secretion of several hormones, including glucagon, insulin, and growth hormone.  Watermelon is a great detoxifier and is loaded with vitamins such as Lycopene, Vitamins A, B-6 and C and a good amount of Potassium.  It can also help with heartburn and it helps to dialate arteries.  And the best thing about watermelon - it tastes ohhhh so yummy! 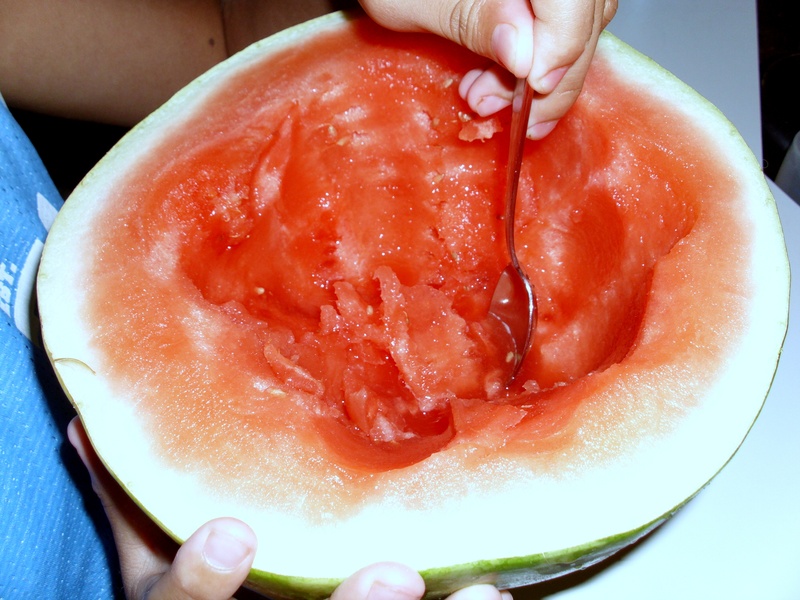 Oops, you forgot something.

The words you entered did not match the given text. Please try again.

Reply vjjjdehn
4:19 PM on August 1, 2012
If you eat grains and heavy starches on a daily basis several times per day then that can have something to do with the initial spike. The L-arginine and minerals in the watermelon will work to do the opposite. Try eating the watermelon on a day when you aren't eating grains and heavy starches like white potatoes and see what happens. The long term benefits of watermelon is what the research is looking at - helping to get rid of the ammonia from your body which is a major contributor to poor and erratic insulin production and actually promoting insulin production. http://jn.nutrition.org/content/137/12/2680.short There are also significant results with watermelon when it comes to blood pressure, http://www.nature.com/ajh/journal/v24/n1/abs/ajh2010142a.html There seems to be a direct correlation between diabetes, high blood pressure and high cholesterol.

Reply Anne
12:07 PM on August 1, 2012
Sorry to be negative but the last time I ate watermelon my blood sugar spiked over 200. No mater what other good things are in it, I cannot handle the sugar surge. If someone is concerned about what a food will do to their blood sugar all they have to do is to test before eating and then 1 and 2 hours after eating.

Oops! This site has expired.

If you are the site owner, please renew your premium subscription or contact support.